Our maestro is often asked, “What works written today will be played in 100  years?” This concert is his answer! Missy Mazzoli’s tribute to the city of Detroit,  River Rouge Transfiguration, and Michael Daugherty’s piece in memory of his father, Reflections on the Mississippi for Tuba and Orchestra, will leave you  in awe during the first half of the concert. For the finale, Mason Bates’ The  Anthology of Fantastic Zoology will showcase every section of the orchestra  as he musically illustrates the fantastical creatures of Jorge Luis Borges’ 1957  Book of Imaginary Beings. This music is unforgettable and an instant masterpiece of our time.

From Missy on River Rouge Transfiguration: “…all around me and above me as far as the sky, the heavy, composite, muffled roar of torrents of machines, hard wheels obstinately turning, grinding, groaning, always on the point of breaking down but never breaking down.” — Louis-Ferdinand Céline, from Journey to the End of the Night

I first fell in love with Detroit while on tour with my band, Victoire, in 2010. When I returned home to New York I dove into early Detroit techno from the late eighties, Céline’s novel Journey to the End of the Night and early 20th century photographs by Charles Sheeler, who documented Detroit’s River Rouge Plant in 1927 through a beautiful, angular photo series. In my research I was struck by how often the landscape of Detroit inspired a kind of religious awe, with writers from every decade of the last century comparing the city’s factories to cathedrals and altars, and Vanity Fair even dubbing Detroit “America’s Mecca” in 1928. In Mark Binelli’s recent book Detroit City Is the Place to Be, he even describes a particular Sheeler photograph, Criss-Crossed Conveyors, as evoking “neither grit nor noise but instead an almost tabernacular grace. The smokestacks in the background look like the pipes of a massive church organ, the titular conveyor belts forming the shape of what is unmistakably a giant cross.” This image, of the River Rouge Plant as a massive pipe organ, was the initial inspiration for River Rouge Transfiguration. This is music about the transformation of grit and noise (here represented by the percussion, piano, harp and pizzicato strings) into something massive, resonant and unexpected. The “grit” is again and again folded into string and brass chorales that collide with each other, collapse, and rise over and over again. River Rouge Transfiguration was commissioned by the Detroit Symphony in honor of Elaine Lebenbom. Thank you to the Detroit Symphony, Leonard Slatkin, Erik Ronmark, Rebecca Zook, Farnoosh Fathi, Katy Tucker and Mark Binelli. — Missy Mazzoli

Notes from Mason Bates: The slim size of Jorge Luis Borges’ Anthology of Fantastic Zoology belies the teeming bestiary contained within its pages. A master of magical realism and narrative
puzzles, Borges was the perfect writer to create a compendium of mythological creatures. Several are of his own invention. The musical realization of this, a kind of psychedelic Carnival of the Animals, is presented in eleven interlocking movements (a sprawling form inspired by French and Russian ballet scores). In between evocations of creatures familiar (sprite, nymph) and unknown (an animal that is an island), brief “forest interludes” take us deeper into the night, and deeper into the forest itself. Imaginative creatures provoke new sounds and instrumentation, with a special focus on spatial possibilities using a variety of soloists. For example, the opening “Sprite” hops from music stand to music stand, even bouncing offstage. “The A Bao A Qu” is a serpentine creature that slithers up a tower; gloriously molts at the top; then slides back down. The entire movement – like the life-cycle of the animal – is an exact palindrome. “Nymphs” features two frolicking clarinets, while “The Gryphon” uses timpani and brass to conjure a flying lion that hunts horses (in this case, the violins). The lyrical core of the piece, “Sirens,” features offstage violins that lure the rest of the strings, one by one, to an epiphany. But it is short lived, as the island they approach devours them in “The Zaratan,” an island sized animal conjured by tone clusters. The sprawling finale occurs at the witching-hour moment between midnight and dawn (madrugada, from the Spanish). This movement collapses the entire work upon itself, as all of the animals fuse together in the darkest, deepest part of the forest. 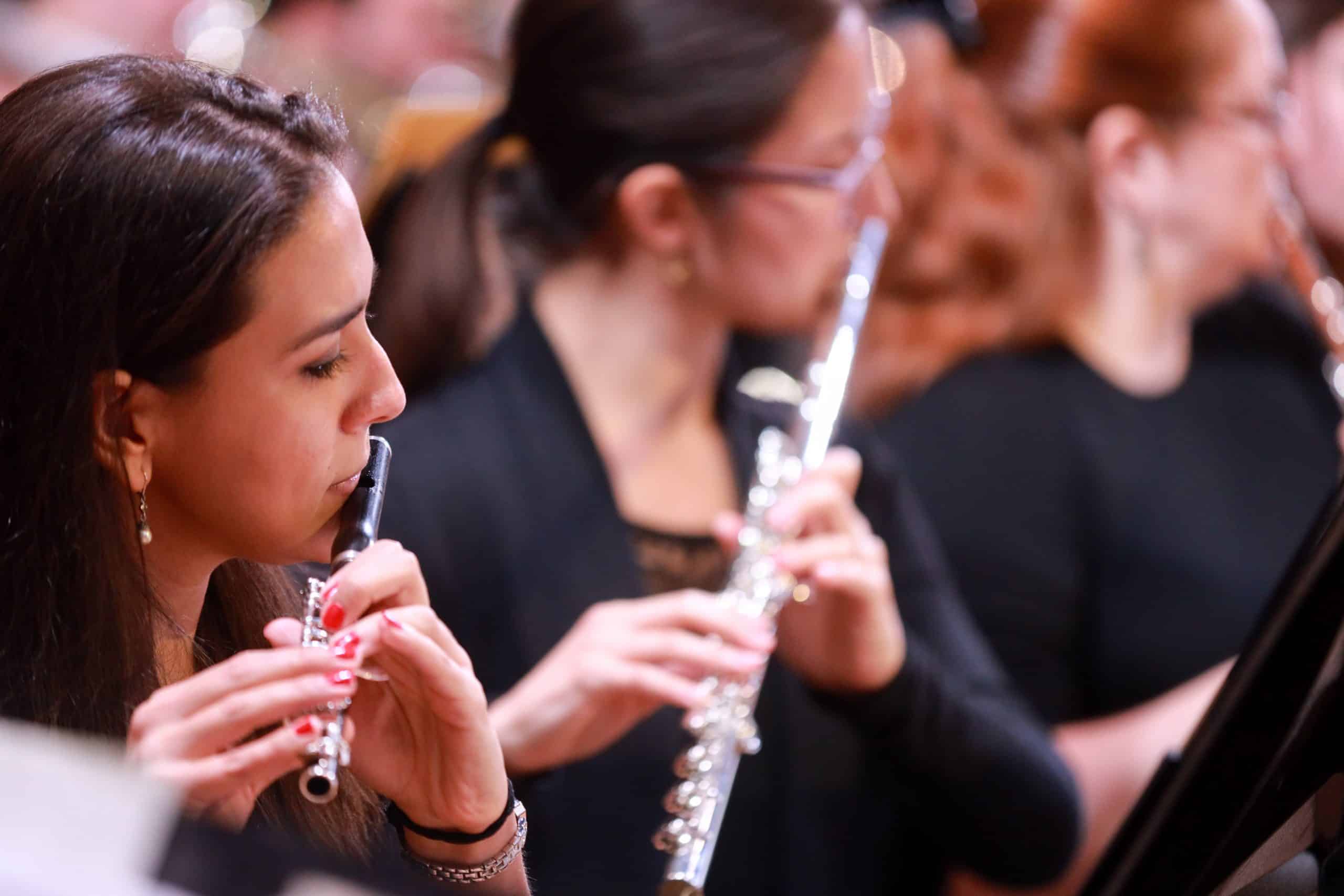