This show has been canceled. All ticketholders will be refunded beginning Nov. 8, 2022.

In the history of popular music, there have been few singer / songwriters that have been as prolific and impactful as the legendary Carole King & James Taylor.

Carole King has been inducted into the Songwriters Hall of Fame and the Rock and Roll Hall of Fame respectively. She wrote several Top Ten hits for various groups with her partner and husband Gerry Goffin during the ’60’s and in 1971, her Tapestry album became the top-selling pop solo album ever and held that position until Michael Jackson’s Thriller in 1982. Over the course of her long career, she penned over 400 songs that have been recorded by more than 1,000 artists.

James Taylor rose to fame in the 1970s, when he became known for writing and performing sensitive, affecting songs. Over the course of a long-running career, Taylor has won five Grammy Awards and is the first artist to have top 10 albums in each of the last 6 decades. He was inducted into the Rock and Roll Hall of Fame in 2000 and received a National Medal of the Arts in 2011. Taylor continues to be esteemed as a songwriter and performer whose work speaks to people’s inner emotional lives.

In November of 2007, Carole King and James Taylor came together to perform a concert that celebrated the 50th anniversary of the Troubadour in West Hollywood. The concert was also a reunion of the two artists who performed regularly together in the early ‘70’s.

Greg Pitts of the stellar James Taylor tribute “Fire and Rain” has joined forces with Katie Pinder Brown from the incredible Carole King tribute ” Natural Woman” to put together a show that honors the legacy of both of these renowned performers.

When you attend a Troubadours Live performance, you will be astounded by this bands immaculate renderings of such classic numbers as  “Fire and Rain”, “It’s Too Late”, “Carolina in My Mind”, “So Far Away”,  “ Your Smiling Face”, “I Feel the Earth Move”, “Shower the People”, “Jazzman”, “You’ve Got a Friend”, “Locomotion” and many others.  This excellent group of musicians faithfully pays tribute to these iconic artists with outstanding accuracy and attention to detail.

Come and celebrate the music of two of the most renowned pop artists of our generation with Troubadours Live, a Tribute to Carole King & James Taylor. 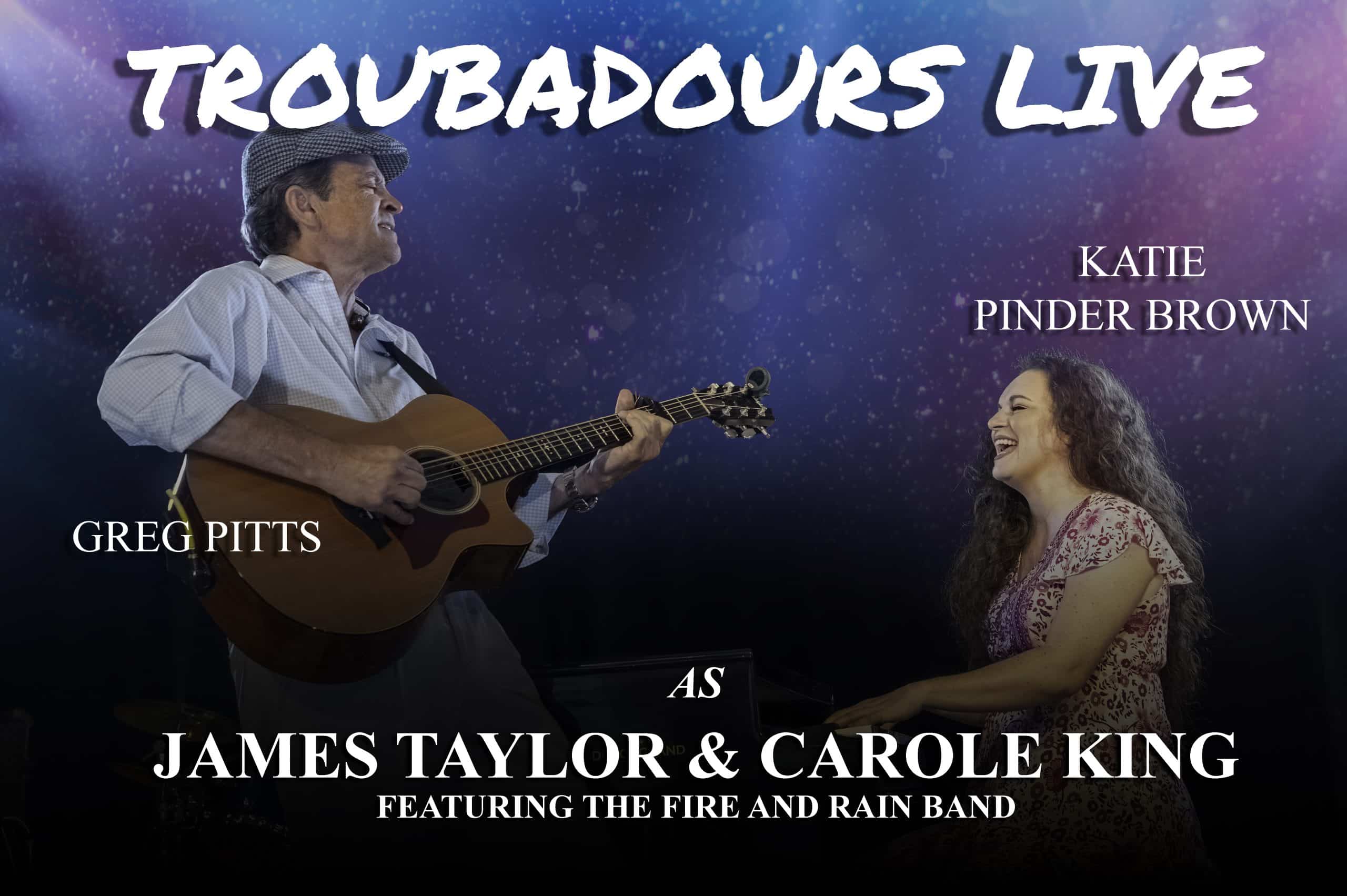